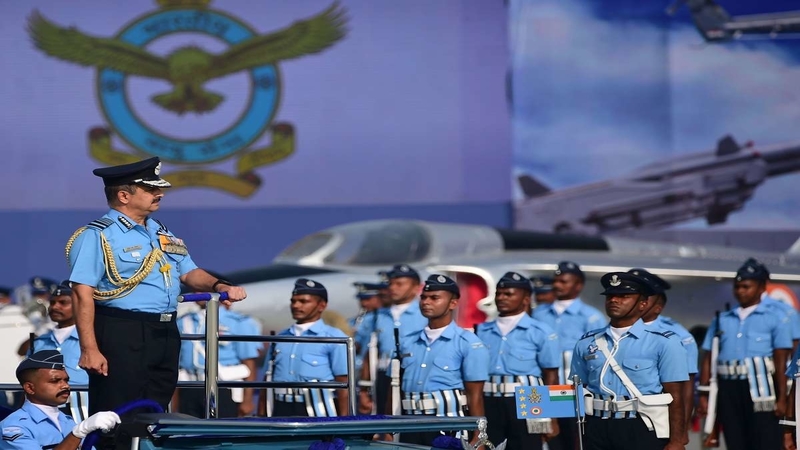 The chief of Air Staff exuded confidence that the Indian armed forces have provided enough deterrence to preclude any "misadventure on our borders".

Air Chief Marshal VR Chaudhari on Sunday said India should view the situation along its unsettled western and northern borders as a "two-front" conflict and prepare accordingly, referring to the possibility of a collusive military threat from China and Pakistan.

In an exclusive interview to PTI,the Chief of Air Staff said India could be attacked on all fronts, starting from military standoffs to information manipulation and blackouts in the future and its security doctrines and capabilities will have to cater to such possibilities.

When asked about China's fast deployment of its air assets near the Ladakh-Arunachal frontier, he responded the "IAF can deliver the desired punch when required within a very short time-frame."

With regard to the rapid geopolitical upheavals, the Chief of Air Staff stated that any future battle will necessitate the integration of all parts of the national security system in order to be a "All-of-Nation-Approach."

"We have certain challenges on our western and northern borders, primarily due to unsettled borders. It would be prudent for us to comprehend our situation as a 'two-front' contingency' and prepare for it accordingly," he opined.

But it is for the first time that a serving chief has called for a detailed plan to deal with such a threat.

"We are also cognisant of the need to be prepared for an event-based short-duration operation which necessitates quick planning, rapid deployment of assets and swift action," he said.

The chief of Air Staff exuded confidence that the Indian armed forces have provided enough deterrence to preclude any "misadventure on our borders".

On China expanding its military infrastructure along the LAC, Air Chief Marshal Chaudhari said the IAF continually keep abreast of the capability development across the borders and take actions to mitigate any threats that such developments may cause.

"I am happy to see the pace of our infrastructure up-gradation in order to meet the requirements of our new inductions and operational imperatives," he said, adding the Chinook helicopters have started operating from one of the two earmarked bases in the east with infrastructure development nearing completion at the second base.

When asked what role the IAF can play in the Indo-Pacific, the Air Chief Marshal said the IAF is committed to safeguarding freedom of navigation and the advancement of a rules-based order in the region in accordance with the country's foreign policy.